M V Subramanian (MVS) Co Founded Future Focus Infotech. He speaks passionately about “belief” being the only factor in getting his first customer for his four ventures. He did his engineering in Mechanical and worked with GEC Alstom as an engineer for almost seven years before his entrepreneurial stint began. MVS says that he builds a massive belief among his customers to get convinced about his idea

He talks about his first stint as an ISO 9000 consultant right after his GEC days.  He began talking to multiple people about his experience which he gained during his employment.  He had an opportunity to talk to someone who was a senior person with a Public limited company  in Gujarat.  He spoke to the person about the options in implementation based on his knowledge but what differentiated him and his pitch was the belief that he had in his ability to add value and that showed in his discussion. In-spite of other large consulting firms competing for the prestigious assignment, he got the go ahead to be a consultant for the Public limited company. That was his first customer ever as an independent person. He had a belief and he was able to communicate the belief. MVS says that the  customers first pay for the belief and not for the expertise. MVS says that the selling part begins only then but the entire sales ends once the customer experiences the product or services and makes the final payment. The post-sale is the experience they will get by using  the product or service which will lead to repeat business. MVS recollects the happiness he got when he heard that the person who was in-charge of the engagement got promoted after the implementation was completed by him. He understood that the belief was the main reason why he got the assignment and henceforth kept it as a major aspect in his client conversations and  he was able to instil the same belief into others which resulted in five more assignments which included 5 large public limited  companies.

On his first customer in his second venture, he was doing trading as a hobby and realized that any investment will give returns over a five year span rather than in the short term in the stock market. He did not have any formal training in equities but figured out the trend in  short time through some analysis from his hobby and believed it very firmly. This resonated in his voice when he spoke with his friends and he was surprised when his friends asked him to take over their portfolio and manage it for a fee. He was upfront and re-iterated that this was just a hobby but his friends insisted that he should do it.  They also began referring to him  their other friends. This belief, MVS says actually got him close to 100 customers whose investments ranged from INR 1 Lakh to INR 20 Lakhs and managed their portfolio. The facts of them making a better percentage which will be better than they investing the money in a bank coupled with his belief backed with data  got him the first few customers in his second project.

On his first customer in his third project – Training, MVS says that there are two types of customers – one who wants to get trained and the other one are those companies who take the trained resources as consultants and pay money to the institute. MVS took an interest in analysing the IT industry because it was growing rapidly . This was in 1997 and he figured out that Y2K is going to be a real opportunity for Indian IT companies.  He evaluated the options for setting up a IT training & Consultancy service by speaking with some of his friends and the need got established.. Many budding engineers were waiting to take a plunge in IT Industry but were not sure about the right entry points. He convinced his relatives & friends and made them to enrol into the course as first customers

MVS says that Y2K training service was unique since customer’s didn’t know what Y2K was then and customers bought only what they saw – his belief.

MVS recollects that there were situations in the first few days of  Counselling where MVS presented his belief on the value of taking up Y2K as a course and the students were convinced.  MVS and team were surprised when the majority of the students in the group were Arts & Science students and he was not sure if  the clients will hire them to solve Y2K problems. He explained the issue and  rejected them after one on one counselling. MVS was surprised when those students brought their parents to the institute to convince them that they can make a career. MVS recalls that it was a great experience to be in, because the students & parents believed  in the potential of the program through his words.. Those students got placed finally because they also put in their extra effort to get employed. MVS believes that the best way to acquire customer is to be honest in your approach.

Further he bumped into an article in Economic Times in 1997, that One of the large Indian IT company was  looking out for Y2K professionals. Realizing the opportunity that lies in front of them, the founders went to meet a senior most executive of the company. They  were refused a  meeting because Focus Infotech was not even a startup then  and was just setting up their operations. He found out that two other vendors along with a  group IT company got empanelled as a vendor and he knew he was no match for any of these three companies. He did not give up and kept his attempts in trying to meet. Finally, due to his constant follow-ups, he got  a chance to meet a Senior person in the organization and discuss business opportunity. This meeting, MVS recalls is the turning point for Focus Infotech. The person said that they are in need of people immediately and MVS realized that even if he gets the go ahead, his batch will get trained only in three months’ time from then and the company  will not wait that long. He pondered over the alternative options. MVS figured out that the company might relent because they were not getting right quality resources from the empaneled vendors also. He found out that the company  will be happy with Cobol/Dbase skilled resources and they are willing to train those people on Y2K all by themselves. In return, they were willing to give the consulting firm a monthly sum for the contract people they will take. MVS seized this opportunity and went out into the market and hired Cobol skilled people & because of his belief that these people can scale very fast with minimal training, deputed  these resources. He knew that he had to continue paying salaries to these people if they don’t get selected by his client and he was also not sure about the margin money he would  make but he wanted the software major  to be a customer and he went all out in servicing them. , His instincts proved right & all his resources were taken in and MVS began making money on his consulting venture also through his first customer. Today this Indian IT company major  is one of the large customer for the last 18 years.

MVS has seen the entire lifecycle of first few customers over the last 3 decades and he is now an investor with several startups and is also guiding his kith & kin  in setting up their food business. He re-iterates the fact that Founders need to carry the belief system with them and manifest that in the client conversations to acquire customers. He also says that Investors put in their money in start-ups based on the promoters conviction on the idea and the trust gets built based on the belief. MVS’s opinion on core competency – Nothing, in hindsight is core or non-core, but it is related to the individual promoters & their strengths in influencing the customers and making them believe. He says that he had no prior experience in investment, training and consulting but he made successful ventures out of it because of only one factor – Belief. He and his team have grown the consulting division to about 2000 people when none of the founding team came in with any relevant experience in that line.

Have a service mentality before and after the contract 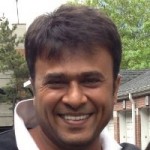