Praveen Gupta Co-Founded Symphony Fintech along with two of his other friends from BITS Pilani,  J P Gupta and Sanjay Das (NRI). Praveen and JP have been in the business of providing IT Infrastructure service and solutions(Comtel) for Stock Broking industry in India, for more than 20 years. Sanjay Das has been working on Technology solutions for Wall Street companies in US and when the two of them asked Sanjay if he would be interested in bringing his knowledge of Algo  Trading to India, he accepted and that is the beginning of Symphony. The company was founded in 2010 to bring Algorithmic (or Program) Trading Platform in India, through Indian Stock Brokers.

In those days, Algorithmic Trading had already started in India but for only Prop Desk Brokers and Hedge Funds, who deployed large funds and were firing hundreds of order in fraction of seconds, mostly trying to capture arbitrage opportunities using High Frequency Trading (HFT) solutions. The solutions were capital intensive and this was beyond the reach of retail Traders. They thought of democratizing Algo trading to the small retail traders & brokers and built a complete trading platform for them to program their trading methodologies and automate them to minimize human intervention and be a disciplined trader. This was the first time such trading platform was to be introduced in India. In their opinion this market was much more scalable and a long run solution. They knew the domain and were aware of the core technology but had to research on the mindset on the Indian retail Traders.

Since they were ahead of time for the market, they had to imagine what traders will need and how convenient and economical it will be for the brokers to offer these solutions to their traders. They also realized that they were supposed to seed and to educate the markets. They were ready for all of that. Once they completed building their trading platform and planned to go to the market, they had problems in identifying who their first set of customers should be. They were debating if they should locate Traders or Brokers and who they should convince to align with our vision of this new business opportunity. There were further steps of regulatory approvals before they could go live.

Praveen talks about the difficulties he faced in finding the first few customers and adopting his platform to suit them. They decided to find small Brokers who were also traders. They faced  problems in identifying the right buyers because most of the brokers did not have very well defined steps of trading, which could be programmed easily. Those who had defined steps were not ready to risk their money on them. Because of their presence in the industry, they had proximity with the brokers but they did not know who will be the users of the Algo trading, so they kept meeting small brokers and sub brokers. The challenge in identifying qualified customers was that they needed brokers who followed structured rules while in entry and in exit. The Hedge Funds and the FIIs follows rules very diligently but as one goes down to the industry till the individual retailer, there is a lot of gut feel and psychology which determines their entry and their exit. After several rounds of meetings, they could identify couple of them, who were ready to believe in them. However, Algo trading was perceived to be a machine that makes money for someone, and the shortlisted buyers began asking how to make money out of it. Praveen had to explain and educate them that they are giving only the technology to control and to discipline the way to trade. Finally they started working with two sub-brokers who were disciplined traders and programmed their trading methods. They began using the platform FREE of cost and Symphony was to get remunerated in profit sharing if they earn out of our solution.While building the broker’s custom program on the platform, they realized that they did not have ready to use functionalities and began building the additional features based on customer’s feedback. This process took so much of time that these customers gave up and never returned. Now, they went to the next sets of qualified brokers who had programmers with him and also scientific rules to trade with and was ready to take the license of their Trading Platform and custom built his own trading himself. On using the platform the broker realized that speed of execution of their platform was not upto the mark. They tried a few other brokers and found out that if the brokers do not pay money, there is no commitment from their end and they don’t try hard to make it work. So they removed the free trials and priced the platform, so that customers will stick with them during this beta phase and help building the platform that the industry will want. This decision helped them because the paying customers began talking about their needs and began putting pressure on them to deliver and they were there to be our untold beta customers to verify our technology. They lost quite a few paid customers initially, because of failures of all sorts including technology failures, unexpected delays, and insufficient domain knowledge but every customer engagement helped them identify the gaps and they kept on building on those. Praveen also personally attended a few training courses, which some of the traders attend to understand their mind-set and their needs.

Praveen also had a challenge that traders did not have money making trading strategies and were expecting the platform to provide some. So they thought of identifying standard 3rd party decision making applications, such as charting applications, which are now being used by maximum traders and integrated them with their trading platform. They also built standard trade execution programs, which could be easily integrated with the broker’s decision making rules. While they were working with the end-users to build their solutions, they had to convince retail Brokers also who could offer their technology to several of their traders. The challenge was to convince Brokers, as it required investment of infrastructure at their end and risk their reputation and legal issues, if there is a technology failure. They could succeed in identifying few such Brokers but it kept on slipping out for various reasons. Finally, they thought of minimizing the Broker’s risk of investment and show them the Proof Of Concept. They invited their group company in the IT Infrastructure business, Comtel, to invest the required hardware for a Medium size visionary Stock Broker, Composite Edge. All three companies Broker (Composite Edge),Infra Company (Comtel) and Symphony had to contribute to the success of the common goal,invest in their part of scope and finally get rewarded at the end of one year, with shared pool income. They also decided to market the solutions themselves and get the traders to connect to the Broker, so that traders know that Symphony Fintech was liable for everything and would indemnify the brokers on any technology failure. It took some time but they gradually began getting the customers and stabilized the platform.

During this process while they were building the product, they went to their friends to fund the project and could convince some of them to do so. They realized that we will have to go slow, step by step and keep proving themselves. They had to make a choice – Concentrate on building on their revenue focusing on one set of customers OR Build and validate their technology with different type of customers and increase the offerings. They chose the later

After finding the first set of customer, they had to choose the next sets of customers to scale the business. They were looking at chart based traders, Asset Managers trading on behalf of Multiclient Account, Intraday Jobbers, Positional Traders. They reached out to them through seminars, sponsored a few workshops, participated in some industry events and also cost effective Social Media and frequent webinars which gave them lots of in-bound leads and gave them lots of customers. They also invited business partners to build their solutions on their platform and make it available to their followers so as to increase their business offerings and visibility.

Praveen remembers that they did not try the large brokers earlier because he knew that these large brokers will try it for two months and will call it off if they are not able to make it work. Now, with the understanding of solutionizing for smaller brokers, they approached them and began convincing them to use Symphony Fintech’s technology and start offering that to their customers. Over a point in time, over several meetings at different levels with those senior management and Executive Management, they have customers like India Infoline, Reliance Securities, PhillipCapital, Nirmal Bang to name a few and quite a bit of marquee big brokerage firms evaluating their technology seriously.

Praveen says that the three things he did to make his product acceptable in the market 1) Made the product easy to use, scalable and packaged the solutions 2) Joint partnership deals to woo the customers 3)Interacted with the customers extensively to know their mind set and started packaging solutions so that they are easy to use to them.

Praveen’s advice to early startups – Once you have completed your POC, price your product, which will help understanding the standing of your solution in the market and customer stickiness during beta stage. It will also put lot of pressure on you to deliver as you have taken the money from the customer to deliver him what he wants.

Symphony Fintech (http://symphonyfintech.com/), has maintained the size to be about 20 employees, Most of them were from the initial launch period and have lots of customers. Symphony FinTech was selected among the top 20 emerging companies of India by ET NOW and IndiaMart as Leaders of Tomorrow 2013 in BFSI category among more than 100,000 nominations. Praveen Gupta has been the speaker and panelist in various workshops and conferences on Algorithmic Trading and has been covered by some media as well.

Utilize your extended network to win your First Customer
Facebook0Tweet0Pin0LinkedIn0Email0

Working with prospects to co create the product 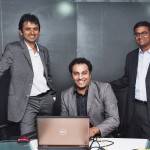 Utilize your extended network to win your First Customer